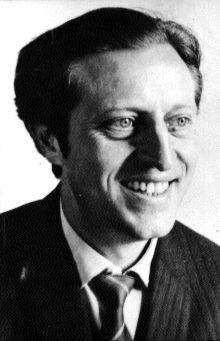 Zelmar Michelini was a man of ideas and action, with an unwavering commitment to democratic ideals.  A believer in truth and freedom, he used those values as weapons in the struggle for human rights and social justice. A journalist and political leader, Zelmar was a compassionate and generous man, with a forceful personality, a keen sense of humor, and a boundless zest for life. He was a fine conversationalist, an eloquent public speaker, a sports fan, an avid reader and above all, a loyal friend and loving father.

Born in Montevideo on May 20, 1924 to Pedro Michelini and Aída Guarch, Zelmar had two brothers, Santiago and Pedro, and a sister, Aida. He married Elisa Delle Piane and together, they had eleven children. He worked from an early age at the Uruguayan Banco Hipotecario, where he was active in the banking employees' union. As a law student at the University he took part in student politics, serving as secretary of both the Law Students' Center and the Uruguayan Federation of University Students.

Zelmar began his political career in the “Lista 15” sector of the Colorado Party, as a disciple of Luis Batlle's. During this period, he served as Batlle's political secretary, as a member of the Chamber of Deputies and as the head of the “Lista 15” voting bloc. During the 1960s, he founded his own political group, known as “Lista 99”, ran for President and served as a Senator and a Minister in the President's Cabinet. He was known as an accomplished and active legislator.

As a journalist, Zelmar wrote for the daily Acción, for Hechos (another daily, which he founded) and for other Uruguayan and Argentine press publications. In 1971, along with other progressive political leaders, he founded the “Frente Amplio”, or Broad Front, a center-left coalition that arose as a possible solution to the serious economic and social crisis affecting Uruguay at the time.

Following the civil/military coup d'état of June 1973, like many other Uruguayans Zelmar Michelini was forced to seek political asylum in Argentina. From Buenos Aires he played a major role, both in opposing the dictatorship and in supporting his exiled fellow Uruguayans. In 1974 he travelled to Rome, to denounce before the Russell Tribunal the violations of human rights occurring at the time in Uruguay.

In May 1976, Zelmar was abducted and assassinated in Buenos Aires by the repressive forces of Plan Cóndor, along with Héctor Gutiérrez Ruiz, Speaker of the Uruguayan Chamber of Deputies, and two young political activists, Rosario Barredo and William Whitelaw.